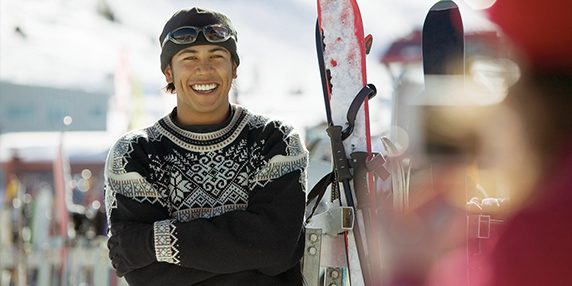 GET THE INSIDE LINE ON WHAT’S NEW

Want to be the first to know what’s going on in Steamboat? We asked our Concierge team to come up with a glimpse into what’s new for 2017. Our resident experts give you the lowdown on what’s happening on the mountain and in town regarding new restaurants, gear, shops, and more.

NEW: FOR FREQUENT FLIERS
Up in the Air: New flights make traveling to Steamboat easier than ever.

It’s no big secret that traveling into Hayden, Steamboat’s gateway airport, is easier than most mountain resorts. The airport can accommodate larger aircraft and it’s not pinched into a tiny valley where landing means your heart ends up somewhere in your throat. Better yet, this season you’ll be able to fly direct from 12 major airports on Alaska, American, Delta and United Airlines, making Steamboat one of the most easily accessed resorts in the Rocky Mountains. Non-stop direct air service into major cities increases this winter with the addition of the following:

Larger aircraft for a once-weekly non-stop flight to Chicago can now accommodate 166 passengers, (up from only 70) on a 737-800 jet, thanks to Alaska Airlines. The aircraft that comes in from Newark will also be larger, increasing the passenger capacity from 150 to 166 and more people can now travel from Washington Dulles (150 up from 128)

And more is more …

More non-stop flights from Dallas will fly into Hayden on American for 14 days during the holidays.

If you need help making travel arrangements or need a ride to the airport, contact xx at our Concierge desk.

And now, a little handcraft beer to go with your champagne powder. Steamboat joins the ranks of other ski towns known for great festivals with the arrival of The WinterWonderGrass, February 23-26, 2017. What sets this event apart, in addition to it being a winter celebration, is that it’s a far cry from a center-stage concert. Throughout the weekend, bluegrass jams will be staged all over the mountain with outdoor fire pits to keep you warm and barbecue that can be washed down with handcraft beer. What more can you ask for, other than workshops and bluegrass picks in the base area? How about this: After the festival each night at 9,100 feet on the top of the gondola, fans can join headliners and special guests. Oh, and of course lots of beer and hard cider tastings all weekend long.

Ski fashionistas rejoice: there’s a new Marmot concept store in downtown Steamboat, located on the corner of Seventh Street and Lincoln Avenue in the Howelsen Place building. That’s 1,800-square-feet of all Marmot, all the time. If you haven’t had a chance to check out the premier technical outerwear’s company line recently, you’ll be amazed and how far it’s come with street savvy fashion that meets on-mountain function, making it the perfect brand for Steamboat living. Maybe that’s why the Steamboat’s ski and snowboard instructors will be sporting Marmot uniforms for the first time this year.

Small and intimate is nice, until you have to wait an hour for a table. Local hotspot

Low Country Kitchen is expanding its seating and its menu this season. Southern classics like shrimp and grits, barbeque ribs, and fried chicken can now be found (and savored) just a few miles away on Lincoln Avenue. If you’re traveling to Denver, check out the new Low Country Location in LoHi at 1575 Boulder St.

If you’re someone who loves to read menus, visit: http://lowrestaurant.com/food/. If you want us to book your reservation, contact xx.

If you’re like most Steamboat locals and you want to get more of a workout than riding the lifts provides, you can join the ranks of athletes who subscribe to “earning their turns” by skinning up the mountain on the latest Alpine Touring (AT) gear. Using skins to keep skis from slipping and special Alpine Touring bindings that allow you to release your heel while walking up and then reattach it for the ski down, Alpine Touring has become Steamboat’s fastest growing sport. Head on over to Ski Haus for the latest and greatest AT gear. This year they’ll reintroduce the best equipment available from Black Diamond and Atomic as well as the much coveted Chamonix-based import, Black Crow. It doesn’t get much more insider than that.