Moose on the Loose 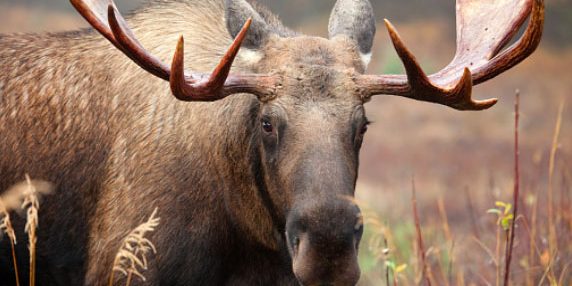 THE MOOSE HAVE OFFICIALLY ARRIVED IN STEAMBOAT

The moose population in Colorado has grown exponentially in the last decade, especially in and around Steamboat Springs. Skiing past a moose on Mt. Werner and other moose sightings are becoming more common as the population in the area continues to grow. We’ve gathered information about why they are here, where they came from and what to do if one of these amazing animals crosses your path.

Their legs are six feet long to the shoulder. They weigh between 800-1,500 pounds and can run at speeds over 35 miles per hour. There’s no doubt about it: Colorado’s moose are a sight to behold. And it appears they’re here to stay.

Twenty years ago, no one saw moose in Colorado but today, these amazing animals are thriving in Colorado, with a sizable population that has grown exponentially over the last five years.

“We’ve had several visits from Steamboat’s resident moose family,” says Sara Gorevan, Concierge at The Porches. “Momma and babies are frequent visitors to our small marsh and love to nibble on the trees around the property.”

According to Colorado Parks and Wildlife, moose started to appear in the area as recently as the mid-2000s. Colorado now has healthy populations all over the western slope, with a thriving population in the Steamboat area. The Denver Post reported Colorado’s moose population began with only 24 transplants near Walden in 1978 and has grown to nearly 2,500, a 35% increase since 2011. Meanwhile, the moose population in Minnesota, Montana and Wyoming has dwindled, mostly due to warmer winters and disease.

The moose population in Colorado are Shiras moose, a smaller, different breed than Alaskan moose. But that’s not to say they’re small—the average male has a 50-inch antler spread. They are easily recognized because of the large flat part of the antler known as the “palm.” The older a moose is, the bigger the palm gets. Antlers fall off annually. Another fun moose fact to throw around at your next dinner party: they eat up to 70 pounds of willow branches, oak brush and grass per day and can run at speeds up to 50 miles per hour.

Moose have become so prevalent in Steamboat that they can often be seen meandering around the ski area. “During winter, moose are often seen on trails, as it is easier to travel on packed snow compared to walking in deep snow,” Colorado Parks and Wildlife district manager Jeromy Huntington told The Denver Post. “We certainly prefer that the moose remain far away from winter recreationists, but that is often up to the moose.”

As the moose population continues to grow, hunting moose has also increased in popularity with over 25,000 hunters competing for only 315 licenses to kill moose in 2015.

If you’re not a hunter packing a rifle and a license to kill, regard moose as unpredictable, wild animals. If you encounter a moose, stop and give them plenty of room to pass. Remember they view dogs as wolves and consider them predators, yet another reason to keep your dog on a leash.

“They are pretty docile, but we warn everyone to keep your dogs away since moose feel threatened by them,” Sara says. “We’re happy to send The Porches shuttle to your home to ‘rescue’ you if the moose are right outside your Porches home.”